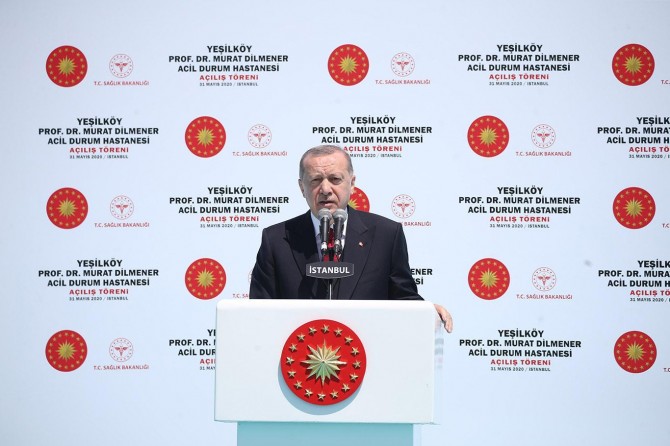 Erdoğan: Turkey has become a center of attraction in healthcare

Erdoğan said: “Our city hospitals, the number of which has reached 11, have become a model on a global scale in terms of their construction and operation methods and their service quality. Similarly, I believe the emergency hospitals, which we constructed within 2 months during the pandemic and put into service, are an exemplary model, as well.”

“With nearly 1 100 000 medical personnel, including doctors, nurses and support staff, we are at our people’s service,” President Erdoğan said. “Our city hospitals, the number of which has reached 11, have become a model on a global scale in terms of their construction and operation methods and their service quality. Similarly, I believe the emergency hospitals, which we constructed within 2 months during the pandemic and put into service, are an exemplary model, as well.”

Noting that the spread of the disease has been curbed without needing the newly-constructed hospitals, Erdoğan said: “These hospitals will, if needed, serve to save tens, even hundreds of thousands of lives.” “These healthcare institutions each – this one and Feriha Öz Hospital in Sancaktepe - have 1008 beds, which can be transformed into intensive care units when needed. They will also serve foreign people who come to our country for diagnosis and treatment.”

“Turkey has become a center of attraction in healthcare,” Erdoğan underlined, pointing to the great progress in health tourism.

Drawing attention to the negative impact the slowing economic activities during the pandemic had on all countries in the world and Turkey, Erdoğan said: “For example, the U.S. economy shrunk by 4.8 %, China by 6.8 %, France by 5.8 % during the first quarter. Turkey distinguished itself among other countries with its 4.5 % growth rate. The leading countries of the global economy do not know yet how to make up for their losses during the pandemic.  Even though the second quarter looks a little bit problematic, after that bright days await us. The developments and indicators show that our country will have a very advantageous position in the global economy which will be restructured after the pandemic. Countries and institutions have realized the risk of gathering all their production in one place and Turkey is at the top of the list of alternatives.”

Recalling that the hospital building had served for a century as a military hospital, President Erdoğan said: “The building has been restored and reopened to serve the city.”

“We have protected the entire heritage in our region”

Once again celebrating the 567th anniversary of the Conquest of Istanbul, President Erdoğan said: “Our ancestors saw conquest not merely as taking more lands but winning over the hearts.” Pointing out that our ancestors every beautiful, good and beneficial thing in the places they conquered, Erdoğan said: “Instead of razing the Hagia Sophia to the ground because of a religious animosity, our ancestors ameliorated it and opened it to the service of Muslims as a right of conquest. Other houses of worship were not touched and they were maintained to meet the needs of the community. However, our mosques and symbolic monuments in the places we had to leave a century ago were destroyed in a short time. Not a single mosque of ours still stand in Athens. They were all razed to the ground. However, we did not resort to such ways in a city like Istanbul. Only this picture is sufficient to demonstrate the magnanimity of our ancestors.”

We have taken under protection the entire heritage in our region,” Erdoğan said. “When we came into power, we saw that only 460 buildings had been restored. In the last 18 years, we have restored 5 060 buildings.”