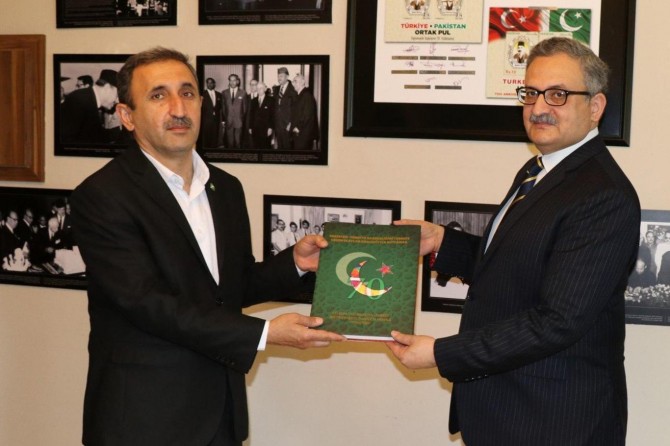 HÜDA PAR pays a visit to Pakistan’s Embassy in Turkey

A delegation from HÜDA PAR led by Secretary General Şehzade Demir has paid a visit to Pakistan’s Embassy in Turkey.

The delegation was welcomed by Pakistan's Ambassador to Ankara, Muhammed Syrus Sajjad Qazi.

During the visit, the two sides discussed the situation of Indian-Occupied Kashmir.

HÜDA PAR Secretary General Şehzade Demir said Kashmir cause was just as important to them as the Palestinian cause.

“HÜDA PAR is a party that embraces seriously all the problems of the Islamic Ummah.”

Demir went on to say: “We have known the Kashmir cause from day one as our own. Kashmir is both our cause and the cause of the whole Ummah. As HÜDA PAR, we embrace seriously all the problems of the Islamic Ummah. HÜDA PAR is a party that knows the troubles of Kashmir, Palestine, Arakan and wherever there is a problem with Muslims in the world. The Islamic Ummah should be able to come together in absolute terms by pushing aside its differences based on ethnicity and sect. This is a very serious need. But unfortunately, no such unity has been formed so far. Unfortunately, structures such as the Organization of Islamic Cooperation, the Arab League and the Gulf Cooperation Organization have remained too passive to address the problems of the Islamic Ummah. Therefore, we have been left at the mercy of imperialism, of Europe and of America. And they never work in our favor. In this regard, we and all Islamic countries must fulfill their duty to establish an effective Islamic Union. If such a formation does not occur, Kashmir and Palestine will fall into further danger. A plan of betrayal like the’ deal of the century ' is on the scene and Palestine is about to be lost.”

“We are ready to do our best to defend Kashmir. Kashmir will continue to be on our agenda, as it has always been on our agenda. Our Chairman İshak Sağlam also has special thanks for Pakistan. He congratulates and appreciates Pakistan for their support to Kashmir,” he added.

For his part, the Pakistani Ambassador, Muhammad Syrus Sajjad Qazi, who expressed his pleasure to welcome the HÜDA PAR delegation, said it was a great honor to have a party like HÜDA PAR supporting Kashmiris.