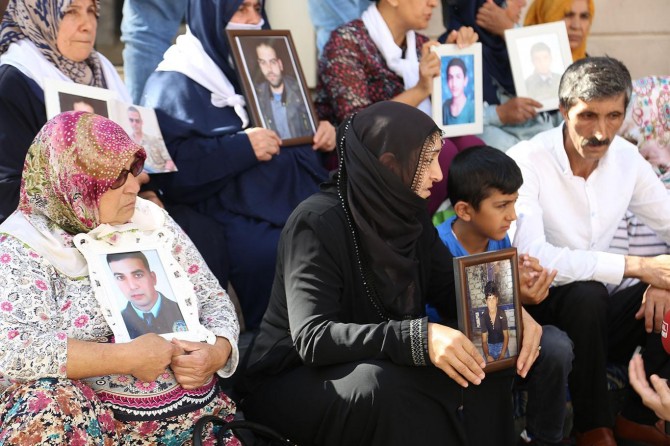 One more family joins sit-in protest: We want our child dead or alive

The number of families taking part in the sit-in protest outside HDP office in Diyarbakır has risen to 26 on Friday demanding their kidnapped children back.

The number of families staged a sit-in protest outside the HDP office in Diyarbakır is increasing.

Families demand their children back, accusing the HDP [People's Democratic Party] kidnapped their children to the rural areas controlled by the PKK, while the majority of families come from poorer parts of Kurdish society.

Şevket and Fatma Bingöl participated in the action in Diyarbakir from Istanbul for their son, Tuncay Bingöl, saying that he was kidnapped to the mountainous areas at the age of 14, and demanded their child back.

Bingöl couple said their children were deceptively kidnapped to the rural areas controlled by the PKK while they were residing in Istanbul's Arnavutköy, adding that they were informed by the HDP officials that their child was recruited by the PKK.

"My son was tricked away by HDP"

Expressing that his son was kidnapped by HDP members 4 years ago he was 14, painful father Şevket Bingöl said every time he goes to the HDP, they say his son is in rural areas but not telling where exactly he is.

"I came here today looking for my child. My son was tricked away by the HDP members in Arnavutköy, Istanbul. No communication, no pictures of my child, nothing. We don't even know if our child is alive."

Underlining that their children have been deceived, brainwashed, father Şevket Bingöl asked: "Why don't they send their own children?"

"Their children are studying abroad, where are our children?" father said pointing the HDP seniors, adding that they will continue the action until the end.

"We want our children back"

Mother Fatma Bingöl said they came to Diyarbakir to look for their kidnapped son. "My child was working in textiles but he was unemployed for the last two months. Last time he said he is going out to look for a job."

"I met my son on the steps of the house when I was bringing my other child from school. I asked my son where are you going, he said he is going to meet someone called L. who found him a job," mother said.

"My child has gone and never came back. We went anywhere we knew to find him but we didn't get any results. We're here looking for our son," she said.

Saying that they want their child back, mother Fatma Bingöl demands HDP to bring his son's body back if he is dead, if alive then ask them to send his son back. "We want our child to come back, to ease our pain."