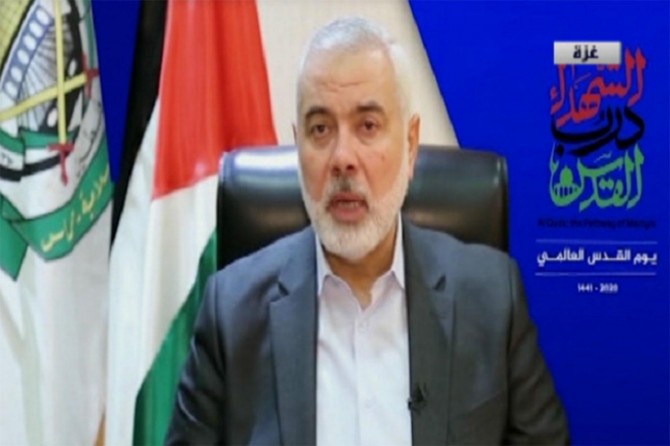 Head of Hamas’s political bureau Ismail Haneyya has called for a joint strategy that is based on all forms of resistance to confront the growing zionist threat in the region.

Haneyya said in a televised speech marking International Quds Day, “Today, as we are facing this zionist danger, we, the Muslim nation, urgently need a joint strategy and comprehensive plan.”

He stressed that resistance with all its forms should be the core of this strategy, especially armed resistance.

Haneyya spoke about the US-Israeli conspiracies that have been targeting Jerusalem, the latest of which is the “Deal of the Century” which recognizes Jerusalem as the undivided capital of zionist occupation gangs and aims to gradually liquidate the Palestinian cause.

He pointed out that Jerusalem has been under siege since 1948 (Nakba) when over 85% of the city was occupied.

Haneyya warned that al-Aqsa Mosque is one of the main targets of the ongoing threats and conspiracies, adding that Israel is trying by all means to change the status quo at al-Aqsa Mosque, alter its Islamic identity and limit the Palestinians’ access to the site.

On the Israeli government’s recently-announced plan to annex the Jordan Valley and West Bank settlements, Haneyya said, “We are facing a huge and serious challenge.”

“However,” he stressed, “The Palestinians will fight by all possible means and in every possible way to defend Jerusalem and al-Aqsa Mosque.”

“Not only Jerusalem. The entire land of Palestine will soon be free,” Haneyya vowed.