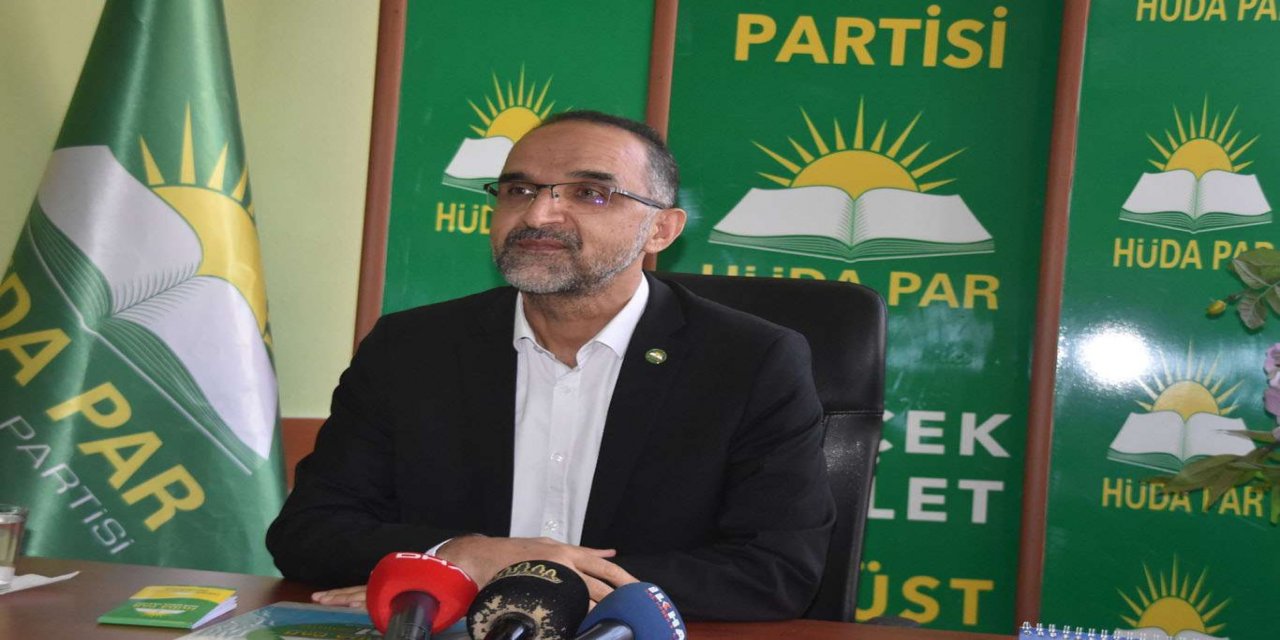 Sağlam: Deals with zionist occupation regime are null and void for Islamic World

HÜDA PAR Chairman İshak Sağlam has paid a visit to Bitlis province of eastern Turkey as part of his party’s organizational works.

During his speech at HÜDA PAR Bitlis provincial headquarters, Sağlam underlined that Turkey should defend the rights of its citizens to the end in the Eastern Mediterranean, where Turkey has right on its side.

Emphasizing that the normalization deals between UAE, Bahrain and Zionist occupation regime are null and void for Islamic World, Sağlam stated that the occupation of Palestine would come to end with the unity of Muslims.

“The deal that United Arab Emirates and Bahrain have signed in the United States doesn’t count for something in the presence of Islamic World. This is a disgrace. Maybe it's a contract that means signing a slavery document,” Sağlam said.

Sağlam continued his remarks as follows: “Unfortunately, most of administrations in Muslim countries live disconnected from their people. The people of Bahrain and the people of Emirates are religious, and they will not accept this usurpation and occupation of Palestine by the Zionist regime, and they will never do so. Their beliefs will not allow them to accept that. Just as the belief and zealous of the peoples in Turkey. Just as the faith and zeal of the peoples of Turkey do not accept this invasion, members of other parts of the Islamic World do not accept this occupation in the same way. For a while, perhaps some country leaders will sign such agreements to continue their rule. But we believe that this occupation is not eternal. Muslims will liberate Jerusalem one day by putting aside their internal conflicts and securing their unity. This has happened in the past. We believe that Islamic World has the potential to raise dozens, hundreds of Saladins. We should maintain our steadfastness and determination. We should definitely reveal the true faces of these traitors who rule some Islamic countries. We should never trust in them. If Allah wills, we, as Islamic Ummah, will get rid of these deals by maintaining our resistance and hope.”

Speaking on the tensions in the Eastern Mediterranean, Sağlam stated that the activities of Turkey with Libya and the Turkish Republic of Northern Cyprus in the Mediterranean are in accordance with international law, adding that Turkey should defend the rights of the its citizens there to the end.

"International relations can't be conducted by piracy with a decision that you will take alone. You need to sit at a table with your neighbors, your interlocutors, and solve your problems. Today, maybe the United States and Europe are trying to get a right by creating de facto situations, sometimes by making a fait accompli. We never accept the thesis that the strong are right in international relations. We think this thesis should be demolished. In fact, we see that there is a great injustice in the fact that only 5 permanent members of the United Nations have the right to veto. Whenever they want, they can prevent the Security Council to pass a resolution, no matter how justified the resolution is. We think there is a big problem with it.”

Pointing out that Greece is trying to draw Turkey into a war at the instigation of France, Sağlam said that Greece knows that it is not in a position to do so alone.

“In particular, what Greece wants to do, perhaps at the instigation of France, is to draw Turkey into an armed conflict. Greece probably knows that it is not in a position to do this alone. With Turkey's history, its past, its economy, perhaps its military forces, Greece probably sees that it is not in a position to wage this war alone. An armed conflict will be against Turkey. In any case, it is in the interest of the country that this issue should be resolved at the peace table, at the agreement table, rather than a war, “ Sağlam underlined.